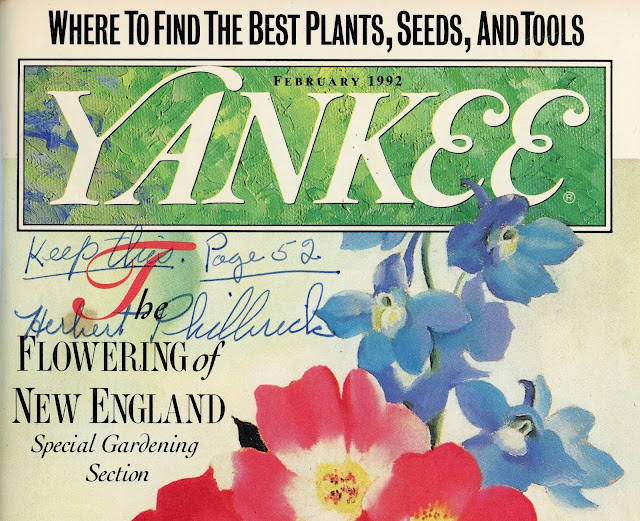 I recently came across a February, 1992 copy of Yankee magazine that my mother had saved. On the front cover, as you can see above, she wrote "Keep this. Page 52. Herbert Philbrick." Page 52 and 53 of the article are pictured here... 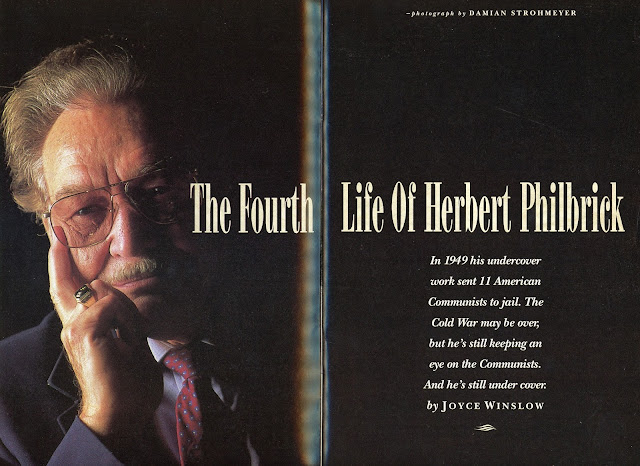 People these days look back at the "Red Scare" of the late 1940s and 1950s and think of Senator Joe McCarthy's claims that Communists had infiltrated American politics, as well as other influential cultural institutions, like universities and the media. McCarthy's Senate investigation into Communist activities is most often portrayed as a witch hunt that ruined the careers of many innocent Americans.

A new word, McCarthyism, came into the dictionaries shortly thereafter: "The practice of making accusations of disloyalty, especially of pro-Communist activity, in many instances unsupported by proof or based on slight, doubtful, or irrelevant evidence."

What gets lost in the recounting of American history is the fact that Communists were, in fact, well organized and actively working in American politics and culture during that time. Herbert Philbrick understood this because he was one of them. Here's how the article begins...


His name today sounds vaguely familiar, an echo from nearly half a century ago, a time when fear of Communism gripped America. From 1940 to 1949 Herbert A. Philbrick led three lives. In one of them, he lived in the suburbs of Boston, taught Sunday school at the neighborhood Baptist church, worked as a press agent for the New England office of Paramount Pictures. In a second, secret life he was a dedicated Communist conspirator who attended cell meetings in Beacon Hill, demonstrated against the government, and was twice arrested. His third and most secret life ended on April 6, 1949.

In the spring of that year federal authorities charged 11 top American Communists with conspiring to advocate the forcible overthrow of the U.S. government, a violation of the Smith Act. The trial in Manhattan's Federal Court quickly became one of the most controversial in American history.

On the tenth day of the trial the prosecution called 33-year-old Herb Philbrick to the witness stand. He was dressed in a a suit with a red-white-and-blue tie, and he told the packed courtroom he had been a member of the Communist Party. Then he stunned the defendants. "During the entire nine years of my activities," he said, "I have been continuously in touch with the FBI."

Philbrick was the government's star witness. He told how he had been trained to blow up Boston bridges and railroads and disrupt communications lines. The jury found the defendants guilty.

The article explains that Herbert Philbrick was encouraged to start the Cambridge Youth Council. He thought the purpose of the organization was to help kids, but those who encouraged him used it as a Communist front. When he realized what was happening, he went to the FBI. Philbrick is quoted in the article...

"As time went on during the nine years, as I advanced to higher levels in the party, I became aware of the absolute evil of this thing."

Here's another excerpt from the article...

Philbrick reached the inner circle of one of the most important cells of the New England branch of the Communist Party. Meeting on Beacon Hill to discuss tactics and strategy, he worked face to face with some of the people he was later to accuse in court. "You should have seen their faces when I stepped up to the witness stand," he says, "I thought they were going to have heart attacks."

Communists are professionals at duping people. Our State Department people, on the other hand, are amateurs. Put an amateur boxer into a ring with a professional prizefighter. Now this amateur may be a splendid fellow, love his mother, and go to church every Sunday. But if he gets into the ring with the professional, he's going to get his block knocked off, and that's what's happening."

"According to the best estimates I've seen, about 1,000 avowed Marxists are teaching in schools and colleges today and some of them are so hateful. Their message is 'Hate America.' We keep track. I have people— for example, recently the Marxists had a weeklong conference at a Big Ten university. I can tell you everyone who was there, and what was said, and what they decided. Marxists can teach, but not me. I was banned by many universities. Maybe due to McCarthy's excesses, there's a great suspicion and fear of anyone who is anti-Communist. McCarthy damaged us with his bumbling. But he was basically right. Still, people think we're nuts and screwballs."

Nuts and screwballs? For being concerned about subversive Marxist activists in America?

Well, I must say, the media manipulators have done an amazing job (since McCarthy) of marginalizing any American who is concerned about any organized, subversive threat to our nation. The mainstream media are the the prizefighters that Herbert Philbrick spoke of in the above quote. And average Americans are total amateurs in the ring.

Americans no longer need to understand real history and true facts in order to come to their own conclusions. The media will interpret these things for us and tell us what our opinions should be. That's the way it works.

And now, 26 years after that Yankee article was published, I'll bet there are considerably more than 1,000 Marxists teaching in the schools and universities of North America. Marxism has become fashionable. College campuses are now dominated by masses of duped fellow travelers and useful idiots.

I'd like to think that there are a few Herbert Philbricks out there, infiltrating the subversive Marxist cells in America today. But I'm not optimistic about that.

This is Herbert Philbrick...