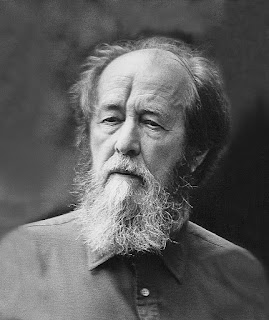 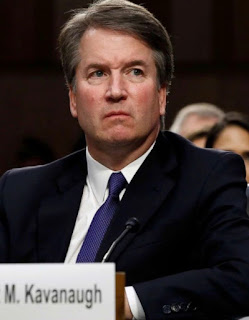 Were he still in this realm, Alexander Solzhenitsyn would surely have found the recent Brett Kavanaugh Supreme Court confirmation hearing of particular interest.

Solzhenitsyn had, after all, seen this sort of thing before. Not the 21st century American version, but the early 19th Century Soviet, Bolshevik, Marxist version. Not only had he seen it, he had experienced it.

The experience should have killed him, like it did so many of his countrymen. But it didn't kill him. Instead, he hung on for years. He survived. And when the time was right, he fought back with a literary and truth-speaking ferocity that knocked the Leviathan Soviet system on it's heels.

No one person, more than Alexander Solzhenitsyn, did as much to destroy the Soviet system. Ronald Reagan gets a lot of credit for the fall of the Soviet Union, but Solzhenitsyn did the heavy lifting, and he paid a hard personal price.

Which brings me to Brett Kavanaugh, a man of rare personal accomplishment, public service, and sterling character. Literally hundreds of people have attested to his sterling character, many having known him for decades.

But Brett Kavanaugh has one very serious problem. He is not a Leftist. Were he such, he would have been confirmed to the Supreme Court by now, without any significant objections.

In the early 1900s, as the Bolsheviks were taking political control of Russia, with the hollow promise of their Marxist utopia, those who did not believe and conform to the Marxist tripe, were routinely arrested and sent to gulag prison camps throughout the country. Or, in many instances, they were summarily killed.

An accusation of some wrongdoing was all that was needed. Corroboration with an accusation was helpful, but it really wasn't necessary. Once you were accused, you had to prove your innocence. The burden of proof was not on accusers, but on the accused. You were assumed guilty until you proved your innocence.

Millions of law-abiding citizens in the Soviet Union were accused of crimes and sent to the gulags with little to no evidence or corroboration. Their "crime" was that they did not conform to the political correctness of their day, which was Marxist-Communism.

In America today, with the growing popularity of Marxist ideology on the political Left, those who do not fall in line with the Leftist causes are regarded as enemies of the Left. As such, they must not not be allowed to speak freely, or to hold positions of influence and power in government.

The direct opposite of a Leftist is a Conservative.  We on the Conservative side of the political spectrum don't conform to speech and thought control mechanisms (like political correctness). We see the logical disconnects and enormous dangers in Neo-Marxism. We know the lessons of history and refuse to be indoctrinated by the Leftist media manipulators, the Leftist academics, and the Leftist cultural engineers. As such, we are pretty much the only hindrance to the Neo-Marxist agenda. We are those who, if the radical Leftists achieve their goals, will be herded into the gulags, or simply and unceremoniously executed.

So, in the minds of the Leftists, Brett Kavanaugh's biggest crime  is that he is not one of them. The Leftist-fueled character assassination and media circus surrounding his confirmation is really a fairly mild Marxist response. They are capable of so much worse.

In the Soviet Union of Alexander Solzhenitsyn's day, police would come to your house, or your place of work, or stop you on the street, and take you away for questioning. Often, your family would never see you again. You would appear before an unelected Marxist bureaucrat who would, in due time, provide you with a written confession to sign.

If you refused, you would be tortured. Sleep deprivation was an "easy" torture. But they had other ways, some deviously creative, and far more effective. Resisting was of no use.

Political, bureaucratic power is a magnet for psychopaths. Such people rise to the top in a Marxist system. They are necessary, and they are rewarded.

In Solzhenitsyn's case, he was sentenced to the Soviet gulag  prison system for penning a mild joke, critical of Stalin, in a personal letter to a friend. In his instance, there was a bit of evidence. But the ironic thing was that Solzhenitsyn was a well-indoctrinated and devoted Marxist (as well as an atheist— all good Marxists are atheists). He was a high ranking military officer and decorated war hero. It was WW 2, and the Russians were fighting the Germans on the Western Front.

Solzhenitsyn was called back from the front lines and imprisoned for the next 8 years. He nearly died in prison. Millions of Russian citizens died in the gulags. Their so-called crimes varied, but multitudes of them were there because of unproven accusations or mere suspicions. Few had honest trials. A trial was, after all, not needed with a signed confession.

All of this is chronicled in Solzhenitsyn's powerful book, The Gulag Archipelago. It is a Red Pill book. Read it and you will see reality behind the facade. It is a disgusting, terrifying, dystopian expose of Marxism. Put aside the modern zombie and horror fiction novels and read The Gulag Archipelago if you want a real scare.

America in 2018 is under attack from within and without by Neo-Marxist revolutionaries, just like Russia prior to the Revolution of 1917. They are seemingly nice people... as long as you go along with their Leftist agenda.

If you don't conform, if you stand in their way, if you are a stumbling block to their plans, the Leftists will morph into monsters intent on destroying you. They will stop at nothing to advance their cause. Their desired end justifies any means.

They may be a minority at the upper levels of the cause, but they are a well-entrenched and fully committed minority. The foot soldiers of this revolution are patsies; they are tools controlled by the deviously cunning, well funded higher-ups.

So it is that Brett Kavanaugh's confirmation is a bellwether event. The Marxist Leftists have made so much progress in recent years. Now they are losing ground. Their gains will be seriously jeopardized by a more Conservative justice on the Supreme Court.  The character and qualifications of the Justice mean nothing to them. Ideology is everything. His confirmation must be stopped.

Solzyhenitsyn would have seen this all too clearly. Before he died in 2008 he warned that America was following in the same path as Russia prior to the October Revolution of 1917. That's when the Bolsheviks took over. That's when the Soviet nightmare began.

God help us all.